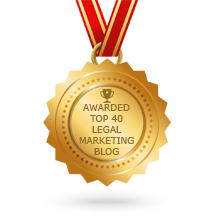 "...The single biggest problem in communication is the illusion that it has taken place."

As part of a broader digital marketing strategy that involves blogging, an FAQ page, updated bios, and an up to date website (among other elements), adding evergreen content to your law firm’s website is an excellent way to drive consistent traffic, and deepen your pool of prospective clients. This week, … read more

Client reviews and feedback are a vital part of providing high-caliber services to clients in any professional services context, including law.  Feedback is a crucial tool for law firms to gauge how they are seen by current clients and whether they are meeting client expectations. It is also important to … read more

Consider Adding an FAQ Page to Your Law Firm’s Website

If you’re a regular reader of our blog, you know that having an up to date law firm website, with informative content, a consistently updated blog, and recent photos of your team, among other things, are key elements of an effective digital marketing strategy.   In addition to utilizing all … read more

“Don’t underestimate the value of the media”

While lawyers are adept at presenting arguments in court, at tribunals, and in other forums, it’s a whole different ball game to appear articulate, confident, and knowledgeable in the media (especially on live radio or television).  What can lawyers do to better prepare for such appearances?   Our Director of … read more

So, you’ve started a law blog. Great! In this day and age, adding a blog to your firm website should be a no-brainer. We’ve previously written about the numerous benefits of blogging for lawyers. But, once you’ve decided to take the leap and start blogging, it’s important to maintain your … read more

We would like to alert you to a conference on a topic that is a growing practice area for employment lawyers.  The conference “Avoiding the High Cost of Human Rights and Sexual Harassment Violations” features experts in the area including mediator / arbitrator lawyers Barry Fisher and Peter Israel, legal … read more

Why Lawyers Should Care About their Website Bios (Infographic)

We’ve previously discussed the importance of having an up-to-date website for your firm. Now, we turn to one of the most crucial aspects of your firm’s site: your bio.   Without a doubt, the lawyer bio section will be one of the most visited pages on your site.  Prospective clients … read more

In late April, The Toronto Maple Leafs built a new “official Maple Leafs fan interaction account” and subsequently, deleted over 1.54 million followers from their pre-existing TML Twitter account. They did, however, leave one follower, team President, Brendan Shanahan. Not a great idea when you’re either rebranding or creating a … read more

In some ways, practicing law doesn’t happen very fast. The courts move slowly and some cases can drag on for years without resolution. But with today’s instantaneous coverage of important news, and a 24-hour media cycle that is always looking for the next big story, there is constant media attention … read more

At the February 2017 Convocation meeting, the Law Society of Upper Canada (LSUC) amended its conduct rules governing the advertising of legal services.   The new advertising rules are intended to strengthen existing advertising and marketing requirements and provide guidance on best practices in advertising. These changes come after months … read more